When we decided to overhaul our website, we also changed the way I present my musings. At first I was a little disappointed that I couldn’t just transfer all of my past journals forward to WordPress, but then as I read through them, I realized most of them no longer hold much relevance for the current incarnation of FotoTechnika. However, in this instance I decided to use a trick that writers often employ: resurrecting old material – like when Gene Roddenberry incorporated his failed, first StarTrek pilot into a two-part episode entitled “The Menagerie.” So if you ever read John’s Journal from our website of old, some of this blog may look familiar.

We first opened our doors to the public in 1987, I had been in offset printing sales for the previous five years and print estimating the two years before that. But I wasn’t totally new to the industry: I worked part-time in a lab at home, had worked at Rothor Color Labs in 1979 & 80, and had grown up with the sons of two wedding photographers, Don Morris and Dan Beard.

When Saundra and I attended the University of North Florida as newlyweds, one semester my evening class finished two hours before her basic black and white photography class. I spent those two hours in the lab while she worked. In the process, I found that I had a real passion for darkroom printing and changed my major to photography. I had no desire to be a photographer; I just wanted to be a photo lab rat. By the time I took advanced photography classes, it was evident that I had a clear edge in the lab. I made up for my shortcomings as a photographer in the trays of the darkroom.

In one course, we had opportunity to do some color printing. In the process of learning how to print and color correct our images, my teacher looked at one of my test prints with me and suggested some corrections. Instead, I decided to use my own judgment, sans corrections gels, and make a full 8×10. He was astonished when the print was pretty darned near perfect. He challenged me to do it again with another image. I did so with similar results. It was at that point that I realized I had a gift for color perception. 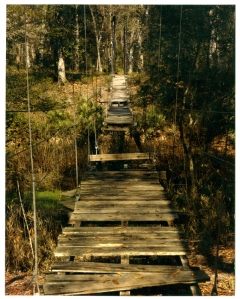 Suspension Bridge at Camp Echockotee,  my first color print, circa 1979

A few years later when I worked in the printing industry, I offered my color correction opinions in the pressroom, only to be ridiculed by the pressmen, foremen, and owners alike. They didn’t laugh after about the third scheduled press approval when an artist from an ad agency would insist on the same corrections I had suggested only hours before. How could a salesman’s suggestions possibly be right? But the truth was evident that color correcting was easy for me, and I was much better at it than all the seasoned professionals I had ever worked with.

Now Saundra – she’s a completely different story. She was unbelievably good at print spotting (a precursor to retouching). She was very talented at mixing and applying color spotting dyes, perhaps because of her fine art training. But she was very conservative in the darkroom, often making oodles of tests to create the perfect Cibachrome print. She always asked my opinion; she is every bit as talented as me, but she wasn’t as self-confident at the time. Where she had me beat by a country mile was in her ability to see micro detail. I chalk these differences up to the hunter/gatherer differences. If we had lived in caveman days, she, as a female would have been a gatherer, observing minute differences in edible and poisonous berries and roots. I, the mighty hunter, would need to make snap decisions on a macro level when going after game that could quickly turn the table on the whole predator/prey scenario. Early on, it became evident (at least to us) that we had complementary, formidable sight-oriented skills, especially for discerning high quality in all kinds of printing.

In 1990, Brian Wanta joined us, and he, too, had exceptional eyes for detail. His previous job was multi-media producer at a local hospital. Back then making mutli-media shows involved cutting and splicing reel-to-reel tape, making multiple exposures of litho film onto slides, creating storyboards, then sinking the visual elements to music – very tedious and intricate, sight-intensive work. This served him well when he took over slide duplicating for us and later translated to the intricate color matching needed for the reproduction of fine art giclées.

For the first decade we were in business, we could still make better-looking prints using all of our tried-and-true optical methods. Then in 1997, we were introduced to the digital fine art market when we acquired a Colorspan DesignWinder from a friend in the industry. On a whim, we decided to ask Brian to try printing on some Arches fine art paper. The prints were a hit and the next thing we knew, Brian was our fine art printmaker.

Saundra and I kept looking for digital photofinishing equipment that produced true photographic-quality prints. In June of 2002, we finally felt we could make the move to digital on the silver halide side of our business and installed a Noritsu 3001. It was an instant success, and fueled a rapid expansion of our digital capabilities.

Printing what we consider photographic resolution is what sets us apart from many other digital printmakers. On the photo side of our business, our resolution isn’t that unusual, but our color perception is. On the printmaking – or giclée – side, our photographic resolution is exceptional because so many printmakers in the industry come from offset printing or sign-making backgrounds. But all the high resolution printing in the world is of little benefit if you don’t first capture a very high resolution image. I’m sorry, DSLRs oftentimes don’t have enough resolution capacity for digital capture of fine art, especially for printing. That’s why we purchased a large format scanning back that is the equivalent of a 48 megapixel camera – our BetterLight system. What may appear to be a really good DSLR file usually pales in comparison when compared side-by-side to a file created by our system.

Technicians have assured us that they can achieve perfect by-the-numbers prints, but we have learned over the years that you can’t always rely on technology. One of our former supplier/technicians asked us, “What do you want – a technically correct print or a pretty picture?” We didn’t give him the response he wanted when we said, “We hope we can do both.” Sometimes, printing by the numbers only gets you in the ballpark. At FotoTechnika, the eyes of our staff are as important as all of our analytical devices. If the prints don’t look right, I don’t care what the numbers say, they won’t sell. In our business, “commercially acceptable” has never been good enough. I’ll be the first to say that profiles and color management expedite the process, but pretty pictures are what we are all about.

We take our work very seriously. Sometimes our perception might not be the same as our customers’, in which case we try our best to please them. With giclées, we seek absolute matches to the extent that processes and equipment allow. With photographs (which are subjective by nature), sometimes we feel it is our duty to educate because we have seen a lot of prints over the years with these eyes and are very confident in our color perception.

And speaking of eyes, mine are getting tired looking at this computer screen – I need to save them for color correcting. I hope that if you haven’t used our services before, you will decide to try us. If there is a specific subject you would like to see addressed in this blog, feel free to respond, and I’ll do my best to address it.

One thought on “The Vote Is In … and the Eyes Have It!”